Throughout the organisation we are committed to offering high quality residential care, nursing homes and support services to older and vulnerable people in our communities. We could not achieve this without the dedication and hard work of our colleagues and team members. In light of this, we strive to provide a positive working environment wherein gender equality is encouraged and supported.

This statement has been published in accordance with the Equality Act 2010 (Gender Pay Gap Information) Regulations 2017, pursuant to which Acer Healthcare Operations Limited is required to publish a report on the gender pay gap within the organisation. The gender pay gap report indicates the difference in average hourly earnings for men and women. The calculations are based on employer payroll data from a specific date each year, being 5 April 2021.

When comparing the average hourly rate of pay, there is only a small difference in the median average pay of our male and female employees and throughout the year we have achieved a narrowing in the median pay gap from 6.7% to 5.5%. The median average is more reflective of the pay gap in the organisation as it is not skewed by extremely high, or low, earners within the data set.

The mean and median pay gaps show a slightly higher pay for male employees. Within this organisation, in addition to those in care giving roles, we employ many individuals in administrative and domestic roles such as receptionists (all of whom are female), domestic workers (of which 85% are female) and activities co-ordinators and organisers (all of whom are female) and on average these types of roles attract a lower rate of pay than those in care giving and more senior roles.

Of the bonuses paid during the reporting period, all but one of the 11 bonuses paid were paid to Home and Deputy Managers. At the relevant time, 2 of these 10 roles were occupied by male employees which explains the gender bonus gap figures. However, throughout the year we have reduced the median gender bonus gap by a significant 22.6%.

The proportion of male and female employees across all quartiles of our workforce is relatively evenly split with: 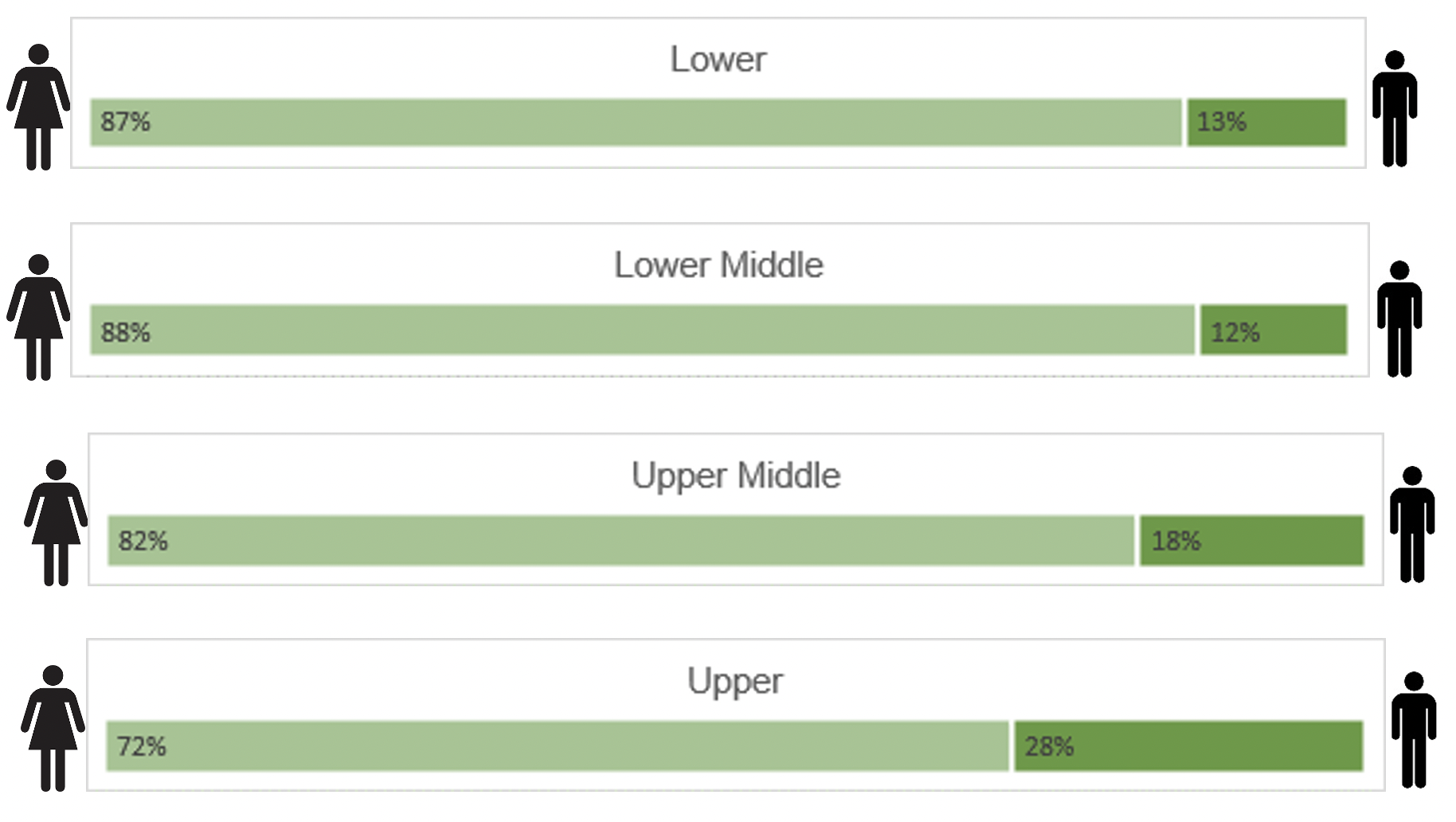 This statement explains why there is a gender pay gap within our organisation and what we are doing to reduce this gap.

Why we have a gender pay gap

Our workforce consists of 82% women and 18% men. The percentage of male employees has increased slightly from the previous year but; as is commonplace within our industry, the majority of our workforce is female. Care giving roles are primarily undertaken by women throughout the industry and the organisation, which generally attract lower rates of remuneration. It is also the case that as an organisation we employ bank workers who work ad hoc shifts and irregular hours and are routinely women. Notwithstanding this, the majority of our management positions are occupied by women.

Our pay structure is banded according to role only, not gender, meaning that pay differentiation only occurs as a result of an employee's position. Similarly, bonus pay is determined by position and performance, not by gender. All remuneration rates within the organisation are competitive and in line with market practices. Accordingly, we are satisfied that our existing pay structure and/or rewards policy are compliant with the Equality Act. We do, however, acknowledge the desire to recruit more men into care giving roles, to provide the opportunity for internal progression for all employees and to increase the number of men holding management level roles within the organisation.

Though not yet at the level to which we aspire, our organisation does have a mix of genders in roles of all types and we are delighted to have increased the number of male employees in the upper quartile by 3.9% since our last published report.

How we intend to continue to address the gender pay gap

In order to address the inherent imbalance within our sector we have implemented/intend to implement the following policies:

We anticipate that Acer Healthcare Operations Limited's continued commitment to this cause will be reflected in the gradual reduction of our gender pay and bonus gap over the coming years.